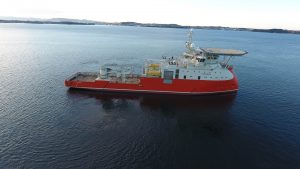 In the same week that a report from ABS revealed problems with almost half of installed ballast water treatment (BWT) systems, Optimarin gave a demonstration of its long-term system reliability onboard Neptune Subsea’s IMR vessel Larissa.

Environmentally friendly and compliant BWT technology company Optimarin has installed more than 300 of its systems worldwide, with over 500 units ordered. The 334 m3 capacity system onboard the SX130 Ulstein design Larissa was one of the first, installed during its construction by Zhejiang Shipbuilding in 2010. Since that point it has only seen 140 hours of operation.

Given its prolonged idle time, Per Ivar Fagervoll, CEO of Golden Energy Offshore, which manages the ship for owner Neptune, thought Optimarin may have had work to do when it visited Larissa during a recent stop in Stavanger. But apparently this wasn’t the case.

“We took over full technical and commercial management of Larissa and sister vessel Despina in late 2016,” he noted.

“Since delivery Larissa has been working consistently for super majors in the North Sea and West Coast of Africa. However we, and the previous ship managers, haven’t really needed to run the BWT system.

“So when the Optimarin team came on board we thought it might have issues. Little did we know… the guys pressed the ‘start button’ and it came into action immediately – smooth operation and no problems at all. Considering its history we thought this was amazing. It’s great for an environmentally focused service provider like Golden Energy Offshore to know that we have such compliant, effective and reliable systems available to satisfy all regulatory and customer requirements.”

Optimarin’s visit came at the same time a special report from ABS highlighted that 42% of systems – from a sample of 220 installed units, across 27 ship owners – were seen to be problematic or not working at all.

Tore Andersen, CEO at Optimarin, isn’t surprised by either the findings, or the long-term performance of his firm’s technology.

“The BWT sector is maturing,” he said, “but some suppliers have seen it as a business opportunity, rather than an area demanding specialist focus and expertise. Optimarin has been exclusively focused on developing simple, flexible, reliable and compliant systems since 1994, installing the world’s first commercial unit in 2000. Last year we became the first manufacturer to achieve full USCG approval. This is a way of life for us, not a means to ‘make a quick buck’.

“The system onboard the Larissa is typical. It has no moving parts, requires minimal maintenance and is flexible enough, thanks to its modular nature, to fit any specialist vessel, such as an Offshore IMR. With the ratification of the IMO’s Ballast Water Management Convention, ship owners will have to install compliant systems on their global fleets over the next few years. We believe, and the Larissa shows, that it pays to invest in technology that won’t let them down, today, tomorrow and far into the future.”