by Sam Giltrow on 8th February 2018 in Latest News 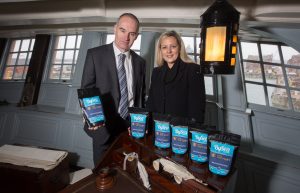 A new coffee that shares its name with Nelson’s famous flagship has been launched to raise money for two maritime charities.

The new HMS Victory BySea coffee is the idea of Hampshire-based Sailors’ Society, in partnership with The National Museum of the Royal Navy.

Sailors’ Society’s CEO Stuart Rivers said: “As a charity, we’ve been fortunate to receive longstanding support from the Royal Navy and HMS Victory.”

In the early 1900s, the Lords of the Admiralty donated wood and copper from the Victory to Sailors’ Society. The charity raised funds by making coins, plaques and busts of Lord Nelson out of the donated materials.

The ship was saved for the nation in 1922 and placed permanently into dry dock where she remains today, visited by 25 million visitors as a museum of the sailing navy and the oldest commissioned warship in the world.

Mr Rivers said: “More than 100 years ago, Sailors’ Society was fundraising with busts of Lord Nelson made from his famous Victory, and now with the support and permission of The National Museum of the Royal Navy we are continuing to raise much needed funds, which will help seafarers around the world. There’s a nice symmetry to it.”

Giles Gould, Head of Commercial Services from The National Museum of the Royal Navy said: “We are delighted to be entering into a partnership with Sailors’ Society, one that will benefit not only both organisations, but more importantly contribute to the goals of both charities, which are inevitably very much intertwined.”

Sailors’ Society, which celebrates its 200th anniversary in March, launched BySea coffee as a way of diversifying its income and profits from the new blend will go to the charity’s work supporting global seafaring communities, with a percentage going to The National Museum of the Royal Navy.

← MO4 introduces new vessel motion forecasting technology
2017 was good, but 2018 will be great, says Optimarin ahead of BWT boost →