by Sam Giltrow on 24th January 2018 in Latest News 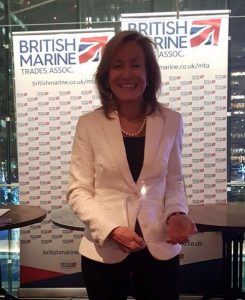 Suzanne Blaustone, Chief Executive of global supplier of marine deck hardware, Barton Marine, has been named as this year’s Outstanding Woman in the Marine Industry.

A brand new award for the Marine Trades Association (MTA), the Outstanding Woman in the Marine Industry Award is presented to an exceptional business professional within the sector. It celebrates someone who strives to deliver time and time again for her business and the industry, has showcased impressive development – both professionally and within the business – and who is passionate about flying the flag for women.

Suzanne was crowned the winner and invited to the stage, in front of more than 100 marine industry professionals, on Wednesday 10th January in London.

Hosted by Katina Reed, Editor of Boating Business and a judge of the Awards at the MTA Dinner, Katina presented Suzanne with her award. She commented: “Suzanne has shown impressive growth for her company, particularly with the introduction of Barton’s new Block Range – an extensive new product line. She’s invested a lot of time and effort into her company, and is heavily involved with the marine industry. She continues to work hard to promote women in the marine industry, and is a key champion promoting networking events and sponsoring, female-specific events at TheYachtMarket.com Southampton Boat Show and London Boat Show.”

In 2014, following the loss of her partner, David Coleman, Suzanne made the very difficult decision to take over as CEO of Barton Marine. Over the last four years, she has been a catalyst to the success and development of the Whitstable-based deck hardware company, and last year launched the biggest and most extensive product line in the company’s history – the Barton Block Range. Coupled with a dedicated workforce – many of whom have been with the company for almost 20 years – Suzanne attributes the success of the company to their expertise, understanding of their customer demographic and demands, and sheer dedication.

She said: “I am truly humbled by this award and touched to have even been nominated. There are many fantastic women in our industry, and to be among the nominations, is a huge honour. This award highlights how strong and powerful our industry is, and the true dedication and comradery of the women within it. I hope that more women stand up and make their voice heard within our sector, and show the real, extensive value of our combined capability.

“Personally and professionally, the last few years have been a challenge – learning and leading a business within an industry I wasn’t accustomed to, motivating a team who didn’t know me very well, and driving the business to realise and showcase its true potential. The launch of our new Barton Block Range has been an incredible achievement – for the business and for me – and I’m proud of the team’s hard work. Today it’s clear that this is all paying off, with an impressive order book, dedicated network of distributors and suppliers, and fantastic workforce. This award is not only for me, but for them.”

Crafted by sailors for sailors, the new Barton Block Range is manufactured in the UK, and developed with the same design endurance and bullet-proof reliability that Barton has built its reputation on over the last 70 years. Combining high performance engineering and contemporary design, the new range of blocks, available from Series 0 to Series 7 inclusive, have been designed for mariners who appreciate sleek styling and demand technical excellence.