by Sam Giltrow on 6th October 2020 in Latest News 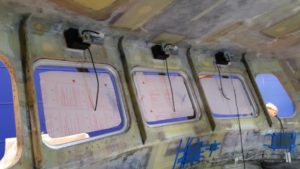 The RNLI has announced its life extension programme for the Severn class lifeboat and DuroWiper Class 60 pantographs are being tested on the prototype vessel.

“If the wipers perform well during trials, we will extend the order to the first batch of six boats in the programme,” said Nick Fenwick Severn Life Extension Project Manager.

“It is advantageous to rationalise supply, but this is not the main driver for selecting a supplier for new projects,” said Mr Fenwick.

“Maintainability and reducing maintenance are key criteria when selecting equipment along with cost, reliability, ruggedness, supplier confidence and any other relevant criteria, dependent on the equipment being supplied.”

Durowipers,  a British manufacturer of windscreen wipers for the marine industry, offers extended and lifetime warranties for its wiper systems which both the RNLI and the UK Royal Navy have taken advantage of.

“That’s how confident we are in the strength of our wipers. The wipers’ reputation speaks for itself.”

DuroWipers originally secured a contract to supply 57 RNLI vessels with wiper systems, including the new Shannon class lifeboats, back in 2012.

It has since gone on to supply over half of the subsequent newbuild Shannon lifeboats.

The RNLI says that the programme of upgrades will extend the life of its Severn class lifeboats so they can continue saving lives at sea for another 25 years.

The largest and most powerful class of lifeboat, the 42t Severn entered service back in 1996 and there are currently 44 of these lifesaving vessels in the charity’s fleet. They need an update as they’re nearing retirement age.

Through this life extension upgrade, the Severn’s wheelhouse will be completely redesigned and a wide range of upgrades will be made.

An allocation of six Severn class lifeboats will be upgraded initially, with the upgrades taking place at the RNLI’s All-weather Lifeboat Centre in Poole, Dorset.

Work is already underway on the first vessel to receive its life extension upgrade which should undergo sea trials at the end of the year.

Aberdeen Lifeboat Station is due to receive the first upgraded Severn by the end of 2021.

The average anticipated cost of each life extension upgrade is £1.25m – significantly less than the cost of designing and building a brand-new class of lifeboat to replace the Severn, but still expensive.

So, the RNLI has launched its “Save our Severns” appeal with the aim of raising £700,000 to help fund these vital upgrades to enable this magnificent class of lifeboat to continue saving lives at sea. To donate visit: RNLI.org/Severn25