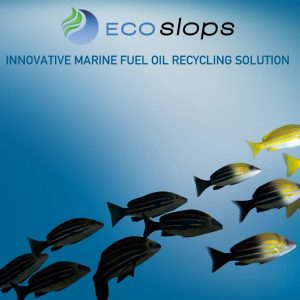 Ecoslops, an innovative technology company that upgrades ship-generated hydrocarbon residues into valuable new fuels and light bitumen, has announced key achievements for the first half of 2017.

Ecoslops has confirmed the excellent performance of the first industrial micro-refinery unit (P2R) in the Port of Sines, Portugal and the strong growth dynamics of its production.

Production doubled, from 6,050 tonnes to 12,200 during the same period last year and sales in tonnes amounted to 9,700, vs. 3,700 in H1 2016. There was also an improvement made to the product mix, due to an increase in sales, with stronger value-added products and a higher sales price per tonne

The quality of the process is still very high, with 98% of waste products regenerated into refined products. Measures taken to reduce costs have been effective during the period, in relation to staff costs as well as other variable and fixed costs, significantly reducing the cost basis in conjunction with the strong growth of activity.

These strong improvements in terms of sales and costs, demonstrated a significant increase in results for H1 2017, compared with the same period last year.

Ecoslops launched technical and economic studies of a new concept: the “mini-P2R”, a reduced-sized unit designed to treat 4,000 to 8,000 tonnes per year and specifically designed for the medium-sized ports globally. This second business line should allow Ecoslops to capitalise on the expertise accumulated with the P2R (capacity of 30,000 tonnes or more), while generating regular revenues (sales of equipment and technical assistance) and proving less capital intensive. Several commercial projects are already being reviewed regarding the mini-P2R, on a virgin market as far as technical innovation is concerned.

Ecoslops also announced the appointment of Wladimir Makinsky as Business Development Director. He is a Merchant Marine Officer and has worked for Maersk Group as a multipurpose officer for six years. Following this, he was involved in the development of Bolloré Transport & Logistics activities (Africa and worldwide) for five years.

Ecoslops is actively developing the Marseilles and Antwerp projects, which was announced in June 2017, as well as the projects in the Canal of Suez and Côte d’Ivoire.

H1 financial results will be released on 27th September after market closing.