by cbrowne on 2nd August 2017 in Latest News 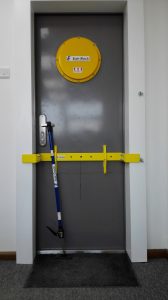 Former SAS serviceman Wayne Harrison was one of a team of guards on a chemical tanker which was travelling across the Indian Ocean from Beira, Mozambique to Dar Es Salaam in 2010 when a gang of Somali pirates in a skiff attempted to hijack the vessel.

Though members of the gang boarded the tanker, Mr Harrison and his team managed to protect the ship’s crew and prevent any imminent attack by using improvised devices to lock the ship’s doors and portholes and thus create an impenetrable citadel.

Inspired by his experiences and the weaknesses in ship security the attempted hijack exposed, Mr Harrison designed a range of robust security products to protect and future-proof vessels against similar threats of seagoing piracy.

The first, Easi-Chock, is a lightweight door-securing device for internal and external doors, and is a modern alternative to homemade wooden baulks or steel bars which often prove ineffective as anti-pirate devices. The second, Easi-Grille, is a porthole protection grille which requires no welding or dry docking. It can be installed in 20 minutes and can withstand up to 1.5 tonnes of pull. The other device, Easi-Block, is a lightweight porthole protection plate that is fitted to emergency exit doors via a ship’s accommodation decks. It is designed to deny access if a porthole is breached, restricting access to the vessel’s door-locking mechanism.

Mr Harrison said: “While Somali piracy is no longer prominent in the news, the threat remains as highlighted by recent attacks. More imminently and presently, piracy and acts of violence and robbery are still rife within the Straits of Malacca, South China Sea, Sulu Sea and the Gulf of Guinea in West Africa being the worst hotspots, especially considering the provision of armed guards is not possible.

“Presently, international guidance advises that ships should be protected by water cannons and razor wire. However due to the limited effectiveness of these measures, armed guards costing anything between $10,000 and $15,000 per transit are recruited for voyages through the Gulf of Aden and Indian Ocean which costs the shipping industry billions of dollars per year.

“The Easi-Chock solution is simpler, more effective and more comprehensive. It turns the whole of the superstructure into a safe haven by implementing many layers of defence with all the crew safely located in the engine room. The system is delivered to delay, deny and demoralise pirates, who realise that they are unable to  gain control of the vessel and thus abandon their attempts knowing they are likely to be caught and brought to justice.”