by Sam Giltrow on 3rd October 2017 in Latest News 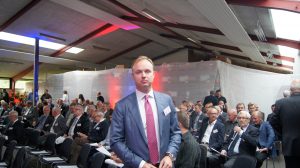 Danish family-owned maritime company Hans Jensen Lubricators celebrated its 100th birthday with a reception at the company headquarters in Hadsund on Friday.

Among the guests were the rector of Aalborg University, the mayor of Mariagerfjord Municipality and representatives of industrial organisations, who gave speeches.

In honour of the occasion, the local community also renamed a road in Hadsund after the head of the second generation of the company, Kjeld Hans Jensen, who originally moved the company from Zealand to Hadsund in North Jutland.

The company has been family-owned throughout the years and is today managed by the brothers of the fourth generation, CEO Rasmus Hans Jensen and COO Christian Hans Jensen.

In 1917. Hans Jensens Maskinfabrik was founded to maintain and repair irrigation systems for gardening and agriculture. However, the small company, located near the present Copenhagen Airport, went through some big changes as early as in 1923. An order placed by the machine and shipbuilding company Burmeister & Wain (B&W) went on to make Hans Peter Jensen, the founder of Hans Jensens Maskinfabrik, among the first in the world to develop a mechanical cylinder lubrication unit.

Hans Jensens Maskinfabrik changed its name in 1993 to the current one and the cylinder lubrication technology has been refined and improved through the generations. Subsidiaries in China and Singapore have also been established.

Rasmus Hans Jensen (pictured) said: “We are constantly faced with the necessity of developing new and innovative products and initiatives in order to live up to the needs and demands of the customers. Similar to other industries, new competitors continue to enter the market, which emphasizes that we should not underestimate the risk of disruption. For this reason, innovation has played a key role for us – particularly in recent decades, where the maritime market has experienced a rapid development.”

Speaking about the anniversary, he added: “It is a great milestone for the entire family that the company can celebrate its 100th anniversary. Continuing a business through 100 years is a privilege that only few will experience, and we are very proud that the company my great-grandfather founded in the early part of the 20th century is still going strong.”