Hook is star of the show 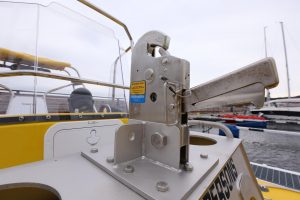 For the first time in many years, Henriksen Hooks is not showing any new products on its stand at Seawork. Instead, the company is giving star billing to a hook that was first shown to the maritime industry over 40-years ago.

The Henriksen Hook was first seen in 1978 since when it has become recognised as the safest and most reliable method of launching a small boat from a single crane or davit. With over 10,000 of the stainless-steel hooks in use around the world, Henriksen is proud of the 100% safety record that it has maintained since then.

Although there are no new hardware products on display at Seawork this year, Henriksen will be presenting its on-line inspection training course that it launched in February. In what is believed to be a first for SOLAS regulated lifting gear, users of Henriksen Hooks are now able to undertake on-line training that will teach them how to inspect their products for safety-critical defects. They will then be qualified to submit a completed check-list that details the condition of various Henriksen products that they may own. When the inspection check-list has been approved by Henriksen the hook will be deemed to comply with SOLAS regulations. This is seen as a major cost-saving for hook owners who would either have to ignore the regulations or spend substantial sums on getting their hooks certified by a Henriksen inspector. A factory inspection every five years remains mandatory but this new idea enables the customer to save significant amounts of money while reassuring themselves that their hooks are safe for the demanding tasks asked of them.

The company is catching its breath after Seawork 2017 which saw the introduction of two new products; the Henriksen towing hook and also the liferaft release hook. Both represented a major investment in development and manufacturing by the company and are on display at Seawork where the company is now concentrating on their sale.

The towing hook has proved particularly successful as it now provides an element of safety in the workboat sector where none existed before. Its design is unlike any of the off-load Henriksen hooks in the range as it uses a disc to incorporate the hook and to enable the stresses of an emergency release to be absorbed.

New models have evolved from the original 40-year-old hook design which, despite its age, is still attracting sales today. The original hook has benefited from modifications that have extended its capabilities and appeal to different markets. These include a lifetime load monitoring system, a remote release mechanism and a swivel mounting that enables it to take loads from different angles plus hooks capable of accepting loads nine times greater than their registered weight limit.

“It is because so many lives are dependent upon the integrity of our products that we see a continuous need to innovate and look for new ways of increasing the safety of seafarers,” said Ole-Rasmus Undrum, Sales Manager for Henriksen Hooks.

“This policy has served us well for forty years so we are celebrating it in Southampton with drinks and hospitality on our stand PY 145 for the customers, friends and the media who have all contributed to its success. “

Based today in Tønsberg on Norway’s Oslo Fjord, the Henriksen family business first began making a wide range of metal products for the marine industry in 1834. The company began to specialise in the design and manufacture of launching hooks in 1978 when Henriksen Hooks was founded as an offshoot of H Henriksen.

The product’s breakthrough occurred in 1990 when the British Royal Navy recognised its potential and purchased 120 hooks to equip all of its warships. Since then the company has remained as an offshoot of H Henriksen and continues under the fifth generation of the family’s management.