by Sam Giltrow on 20th September 2017 in Latest News 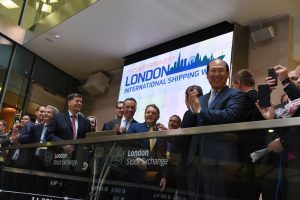 London International Shipping Week 2017 has been hailed a resounding success with thousands of global shipping industry leaders attending more than 160 official events throughout the week.

Initial estimates place the number of UK and international visitors at over 15,000 but this figure could rise even further when the number of ‘unofficial’ events are considered.

Such was the international interest in the week that #LISW17; #LISW2017; and @LISW17Official trended on Twitter twice during the week, with an estimated 11.2 million user twitter reach.

Indeed, visitors from over 50 countries attended the week, including 15 ministers from foreign governments such as Saudi Arabia, Nigeria and Ghana.

The UK Government used the week to host bilateral meetings with politicians and senior industry figures to explore partnerships, future opportunities outside the European Union and examine how to help significantly boost maritime exports.

It really was a week of business with all event organisers reporting very strong attendances at their events. Such was the interest of the varied subject matter under discussion and the high quality of the venues, that the opinion was that London International Shipping Week had come of age and was truly a global must-attend event.

Reflecting on the successes of the past week, Jeremy Penn, Chairman of the LISW17 Steering Group, paid tribute to the strong cooperation that existed between Government and industry.

“LISW17 was bigger and stronger than the previous events in 2015 and 2013 and this reflects not only the importance of government and industry cooperation in helping to promote London and the UK’s prominent role in world shipping, but also the realisation by shipping that London is firmly at the heart of this global industry,” he said.

More than 550 people attended the official LISW17 flagship conference on Thursday 14th September, while just under 1,000 guests and VIPs attended the Gala Dinner in the evening. Both were held at the Grosvenor House Hotel in London’s Park Lane.

“The buy in to LISW17 by industry and government – not just in the UK but globally – has been astounding. While we were anticipating a very strong event, boosted by the attention surrounding Brexit as well as the green shoots of recovery in many key shipping sectors, it is true to say that the actual outcome far exceeds our expectations,” said Sean Moloney and Llewellyn Bankes-Hughes, Directors of the event organisers Shipping Innovation.