by Julian Berry on 19th December 2019 in Latest News 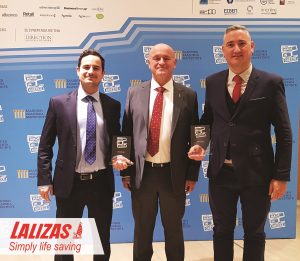 The Made in Greece Awards has been a big celebration for both the academic and the corporate world, honoring manufacturing companies from various industries. The Awards, organised by the Greek Marketing Academy, have been established in order to empower the effort of production plants of companies which are based in Greece.

On the 16th of December, the event took place in Athens, at the Athens Concert Hall, gathering people of significant importance and impact.

LALIZAS has been honored by receiving two Gold awards, one for the Export Excellence for B2B Companies and one for the Best Branded B2B product.

Mr. Stavros Lalizas, CEO of the LALIZAS Group of companies, was awarded by Mr. Kostas Fragogiannis, the Deputy Minister of Foreign Affairs for Economic Diplomacy and Openness.

Distinction in both categories is a great reward for our long-term efforts in producing the best quality safety equipment with the goal of securing people’s safety at sea.

Since 1982, we have been producing superior nautical lifesaving products, with the best price to quality ratio in the market. Based in Piraeus, Greece, at one of the busiest European ports, we continue supporting the local economy while expanding our commercial presence worldwide.

“The product itself is the biggest ambassador of a manufacturing company. It is our greatest marketing tool, which has lead us to this successful exporting activity, constantly evolving while always working as a team”, commented Mr. Lalizas.

LALIZAS was the only manufacturing company from the Greek nautical industry that received an award by the Evaluation’s Committee.

The Lalizas family would like to express its sincere condolences to the family of Mr. George Avlonitis, founder of the Awards, Chairman of the Greek Marketing Academy and Professor of Marketing at the Athens University of Economics and Business, upon their unexpected loss.